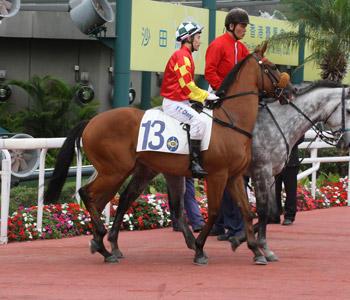 Hollylodge born and bred Haymaker (formerly Al's Kitchen) and owned by Peter and Christine Mills became the first international winner for us overnight with his gutsy win over 1200 m at Happy Valley.

By Al Samer from our mare Alice's Restaurant by Mossman, Al as he was known was a 2 year old Gold Vobis race winner prior to running 2nd at Flemington down the straight, he was then purchased by Hong Kong scouts to race overseas.

Al was broken in and pre trained at Princess Park Nagambie prior to being trained by Ellerton/Zahra racing before heading overseas.

He is Alice's Restaurant first foal, she has a full sister to him going into work today and a colt by Bel Esprit was sold at the Inglis June southern sale for $50,000 as a pin hook and is now coming up for sale in Feb at the Inglis Prem 1 sale as a yearling.

Alice has a ripper chestnut Helmet filly on her this season and is now in foal to Reward For Effort.