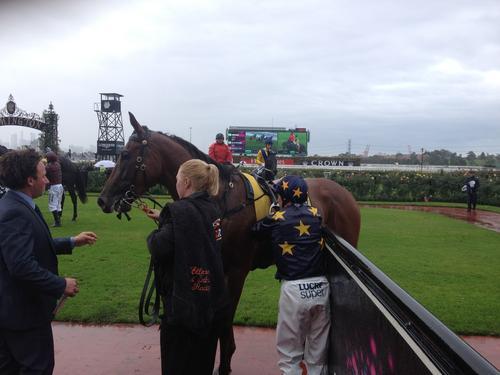 Following on from his 4 and a quarter length win in the 2 year old Gold Vobis at Wangaratta a fortnight ago, Hollylodge owned and bred Al's Kitchen did not disappoint us with his fast finishing 2nd on a Slow 6 at Flemington over the weekend.  Unknown on a slow track he was ridden perfectly by Steven KIng to finish off the race with enormous speed.

By Al Samer from the Mossman mare Alice's Restaurant Al has proved to be a good 2 year old for Hollylodge so far.

His full sister MY KITCHEN RULES is now being broken in at Princess Park, Nagambie and Princess Park have some shares available for sale in the filly now. Hollylodge will retain the majority share of the filly which will be trained by Pat Cannon from Princess Park.

Al is the 34th winner produced by Hollylodge's own mares to date.