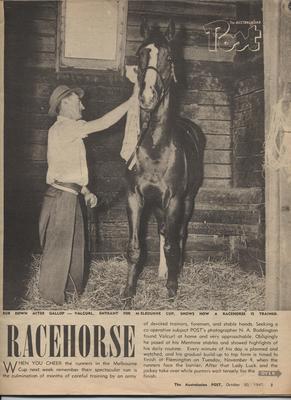 A bit of history from the October 1947 Australasian Post mag, photo shows racehorse Valcurl being readied for the 1947 Melbourne Cup with his foreman Tom Ryan, Valcurl was trained by Frank Manning.

Unfortunately Valcurl did not win, he finished a very credible 9th,  there was a field of 30 runners quite big compared to today, the eventual winner was Hiraji a 4 year old grey gelding ridden by Jack Purtell.

Attendance at the Cup on the day was 87,000 which would just about fill the MCG on Grand Final day now. 1st Place prizemoney in 1947 for the Cup was 10 thousand 300 pounds for the winner.

Further on in the Australasian Post Sport Parade section the tipping wasn't too bad either with Chiron On Racing reporting the following:-

"Apart from Columnist, the best form in the Caulfield Cup from the Melb Cup point of view, was that of Hiraji and Fresh Boy who filled the minor placings. Hiraji will meet Fresh Boy on 4 pound better terms, but at the weights Fresh Boy is to be preferred.

Valcurl and Robert Bruce canno be fancied on any recent form."